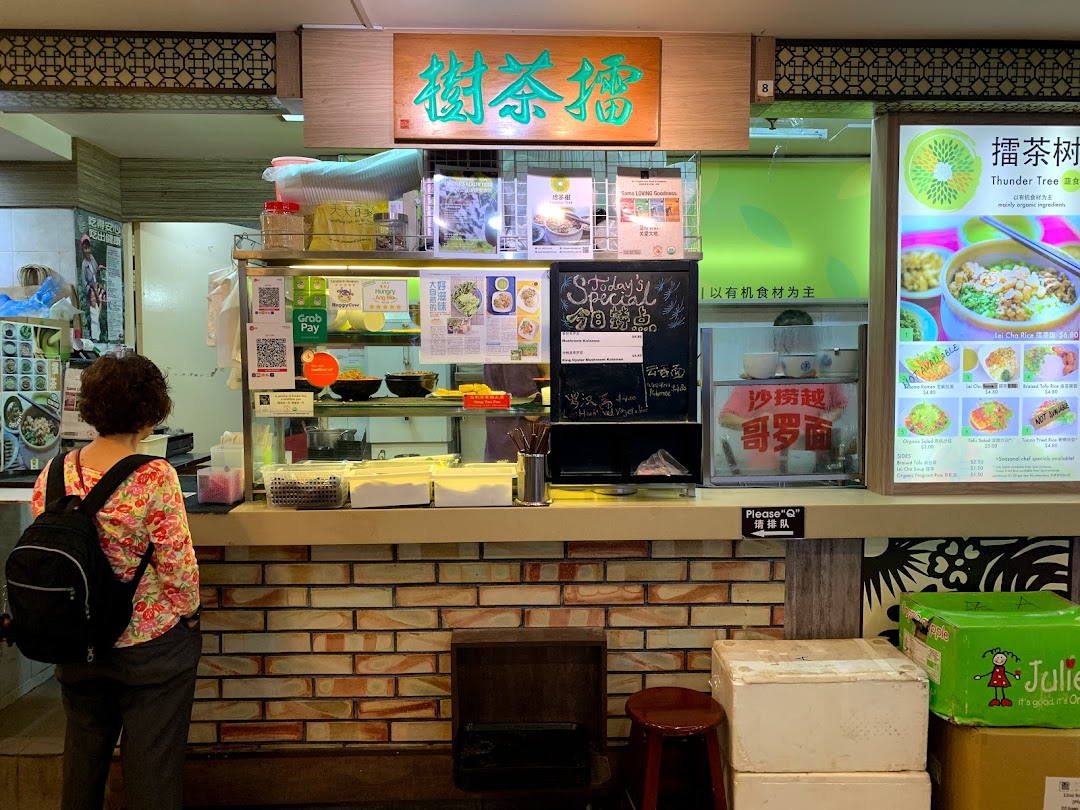 My mother and I have been visiting this stall, over several years, for its robust, minty Lei Cha broth whenever we would visit Peoples Park Centre for a tour of its travel agencies as well as to get budget haircuts, but we will no longer do so. While its vegetables are fresh, with some of them grown commendably by the stall owners at their own farm, and seasoned well, the savoury appeal of their food does not make up for the stalls wildly inconsistent portioning of ingredients, manipulative pricing and deceptive guise of the stalls attendants - perhaps even owners.The incident that has led me to lose trust in the business took place during my repeat visit to the stall, done so during COVID-19 phase 3 (heightened alert), on 07/08/21. I was warmly greeted with a smile by a man in spectacles - also the person preparing the food behind the counter - when I passed by the stall, and that had made me feel so welcome that it did not take me long before I found myself ordering two bowls of Lei Cha Brown Rice at $6.8, but with the brown rice substituted with noodles. I had told the lady taking orders that I would like two bowls of the Lei Cha Brown Rice ($6.80) with the brown rice swapped to their noodles, before noticing on the signboard that there is also a Lei Cha Kolo Mee option, priced at $4.8, sitting below Lei Cha Brown Rice. When it was time for me to make payment, I clarified with the lady if my order would amount to $9.6 + $0.2 x 2 for takeaway containers = $10, only to find that I was going to be charged $13.6 + $0.2 x 2 = $14. Upon probing further as to why I was charged the more expensive version, she, as well as the man in spectacles, quipped in unison that there is at least more than double the vegetables in the $6.8 version than the $4.8 version. I took their word for it and left, expecting that claim to be true when I would have my dinner later at home.However, I was sorely disappointed to find that the ingredients were almost similar in portion to the $4.8 version that my mother would always order on my behalf when dining in at the hawker centre was still allowed (pre-COVID). Moreover, I was frustrated to find that the mint broth was also filled less than half of the tiny takeaway container that it was poured into, a far cry from the normal amount that we would be given in a bigger black bowl while dining in at the hawker centre. An image of their portions for the $4.8 dining-in bowl and a different image showing the $6.8 takeaway bowl that I was sold today, both taken before touched, have been included with this review for comparison - a visibly stark difference is apparent in the amount of mint broth offered, and there is no appreciable difference in the ingredients provided. For the avoidance of doubt, there was some ingredients found at the bottom of the takeaway bowl after finishing the whole bowl, but the sum of the ingredients fails miserably in fulfilling the at least more than double claim.They have also shown either an indifference towards order requests, i.e. dietary preferences, of their customers or a lack of understanding of what they are selling. When I told the lady responsible for taking orders that I do not wish to have any coriander added to my Lei Cha noodles, given my past experience with the accompaniments of the noodles/rice that I have had in the past, I was annoyed to have found my takeaway bowl inundated with the pungent herb upon digging in.Given my experience with the stall today, I feel foolish for having brought a few of my friends and relatives over in the past to support their business; why would a business act wilfully against a patrons wishes while also charging a significantly higher price, i.e. $2 extra, for the same amount of ingredients as what I would have had for their $4.8 Lei Cha Kolo Mee? Doing so would only leave a sour taste in their patrons mouths. A business that not only skimps unethically on ingredients, but also charges opportunistically for a quick profit, really speaks volumes about how much it values its patrons.

This place has the best thunder tea rice in sg in my personal opinion. Not only does it serve the freshest and truly 100% organic ingredients sourced from their own organic farm, the service and attention to detail are always exceptional and top notch. I always look forward to their special menus where you will find innovative dishes and surprises that hit the palate every time.

Delicious and unique food, served by people with a big heart.LOVE their Lei Cha! I’ve been getting my Lei Cha fix from them for a while now.My favourites from them are the Lei Cha kolomee, Hakka Tofu, and Braised Tofu.Lei Cha Kolomee: Their kolomee is consistently well cooked to that QQ texture, with a special tasty almost sweet sauce that I cannot figure out what it is yet. I especially love their generous serving of kolomee alongside the leicha veggies (btw, their Lei Cha rice’s serving can easily feed 2 pax). Even when I ordered takeaway and delivered to my place, the noodles are still very “fresh”. I thoroughly enjoy the flavourful (not pungent or too “tea” wish) Lei Cha broth that comes with it. When I take away, I totally appreciate how they would give customers the un-diluted broth, so that we can add hot water to dilute it to our personal liking and have it served hot.Hakka Tofu: 3 pieces for $4.50. Soaked in some special (somewhat herbal) soup, the tofu totally absorbs the soup and taste blends perfectly in the mouth. The topping on the Hakka Tofu is handmade with real ingredient, not mock meat that kind of stuff. I will always order this to go with my mains, and pls try their special chilli too!Braised Tofu: Superbly fragrant and tasty, it must have been braised over night. I can actually split it into 3 different portions and go with plain white rice and it’s more than enough.Pardon me for my limited vocab to describe their food. Got to try them yourself to be convinced!What makes them truly special beyond their food, is that the owners truly believe in serving healthy farm-to-table food that are wholesome and good for the customers. If I am not wrong, a lot of their vegetables are delivered fresh from their own organic farm at LCK. From there, the food are prepared with much effort without the use of mock meat nor MSG. They also kept the prices as low as they can, and considering we are able to get organic delicious food at such affordable pricing of ~

I order from Thunder Tree once every few weeks (so glad they are doing delivery because I dont live nearby).I feel at ease ordering their food for my family as they use quality ingredients and do not use any msg. All natural seasoning and ingredients! The best part? Tastes super good!The Hakka Yong Tau Fu is a MUST ORDER every single time. Be sure to finish up the soup that comes with it because thats where the essence of the dish lies!I also love their Tempeh because its so succulent and flavourful. 1 serving is not enough for me Their kolomee (of any flavour) is great too. The texture of the kolomee is cooked to perfection even when its delivered and not eaten rightawayAnd of course their signature dish - the leicha rice is unbeatable. Best leicha in town without a doubt. The broth is so flavourful and tasty. The kids drink them up without hesitation